Welcome back to the Library Corner!  Each month our school librarian, Mrs. Connell, recommends three books that the students are encouraged to read.  These titles are available in the Holy Trinity School Library, as well as in the Wallingford Public Library. 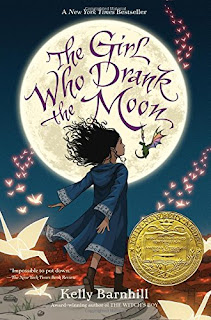 Title: The Girl Who Drank the Moon

Summary: Once a year in the Protectorate there is a Day of Sacrifice.  The youngest baby is taken by the Elders and left in the forest to die, thus appeasing the witch who threatens to destroy the village if not obeyed.  Unbeknownst to the people, Xan, the witch of the forest, is kind and compassionate.  When she discovers the first baby left as a sacrifice, she has no idea why it has been abandoned.  She rescues the infant, feeds each one starlight and delivers the shining infants to parents in the Outside Cities who love and care for them.  On one occasion, Xan accidentally feeds a baby moonlight along with starlight, filling her with glowing magic.  Xan is smitten with the beautiful baby girl, who has a crescent moon birthmark on her forehead, and chooses to raise her as her own child.  Twists and turns emerge as the identity of the true evil witch becomes apparent.  This book was awarded the 2017 Newbery Medal! 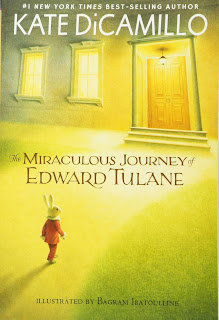 Summary: Once, in a house on Egypt Street, there lived a china rabbit named Edward Tulane.  The rabbit was very pleased with himself, and for good reason: he was owned by a girl named Abilene, who adored him completely.  An then one day, he was lost...  Follow his adventures to see if he is reunited with Abilene! 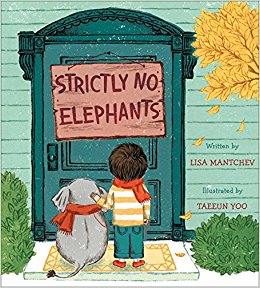 Summary: It's Pet's Club Day, and the sign on the door at #17 clearly states, "Strictly NO Elephants."  Current members treasure their birds, fish, cats and dogs, but a young boy taking a walk with his tiny elephant, sharing an umbrella in a cool fall rain, sees no welcome for his friend, so he simply gives his usual support.  "That's what friends do- lift each other over the cracks...brave the scary things for you."  The boy and his elephant meet a girl with a skunk, who were also excluded from the Pet Club meeting, and decide to start a club of their own, one in which all are welcome.

Check back next month for more recommendations!
Posted by HTS Admin at 5:48 AM