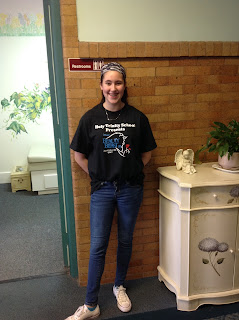 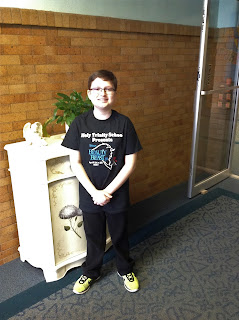 This week we were able to interview Cogsworth and Lumiere!  Both actors have been in musicals before and are very excited to add Beauty and the Beast, Jr to their resume.

What has been the hardest or most challenging aspects of doing this musical?

- "Remembering to stay in character because I'm an object."- Meg

Why should people see the show?

- "Because it's really great and it's coming together really well."- Evan

- "It's going to be really entertaining and interesting because it constantly switches from village scenes to castle scenes." -Meg

Check back soon for more interviews as our production of Beauty and the Beast, Jr gets closer!
Posted by HTS Admin at 7:21 AM No comments: 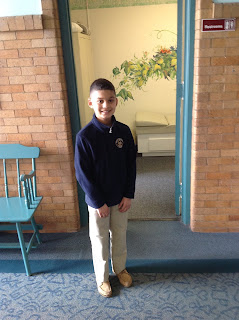 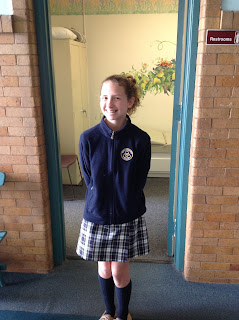 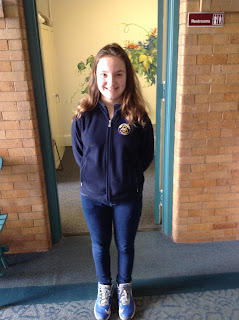 We are a little delayed in posting this week, but we were able to interview Babette, Mrs. Potts, and Chip!  All three actors have been in musicals before and are very excited to add Beauty and the Beast, Jr to their resume.

- "Talking with friends and getting to display our talents on stage."- Alecia

- "It's a learning experience and it helps us get used to acting, not just singing and dancing."- Julia

- "Being wheeled around in a chair."- Jayden

What has been the hardest or most challenging aspects of doing this musical?

Check back soon for more interviews as our production of Beauty and the Beast, Jr gets closer!

Welcome to this month's Library Corner!  Each month our school librarian, Mrs. Connell, recommends three books that students are encouraged to read.  These titles are available in the Holy Trinity School Library, as well as in the Wallingford Public Library. 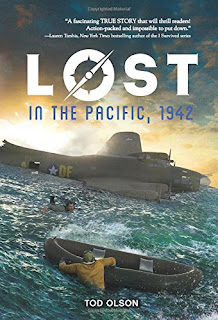 Summary: World War II, October 21, 1942.  A B-17 bomber drones high over the Pacific Ocean, sending a desperate SOS into the air.  The crew is carrying America's greatest living war hero on a secret mission deep into the battle zone.  But the plane is lost, burning through its final gallons of fuel.
At 1:30 p.m. there is only one choice left: an emergency landing at sea.  If the crew survives the impact, they will be left stranded without food or water hundred of miles from civilization.
Eight men. Three inflatable rafts.  Sixty-right million square miles of ocean.  What will it take to make it back alive?

What Mrs. Connell says: "This book is a huge hit, I'm having trouble keeping it on the shelves.  I think they like it because it's a true story." 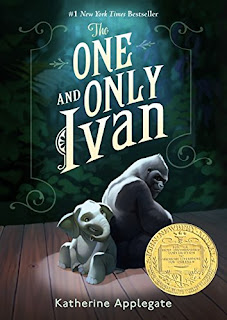 Title: The One and Only Ivan

Summary: Inspired by the true story of a captive gorilla known as Ivan, this illustrated book is told from the point of view of Ivan himself.  Having spent twenty-seven years behind the glass walls of his enclosure in a shopping mall, Ivan has grown accustomed to humans watching him.  He hardly ever thinks about his life in the jungle.  Instead, Ivan occupies himself with television, his friends Stella and Bob, and painting.  But when he meets Ruby, a baby elephant taken from the wild, he is forced to their home, and his art, through new eyes.

What Mrs. Connell says: "Third grade, in particular, has fallen in love with this book!" 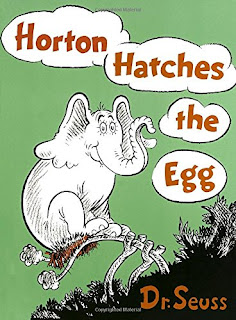 Summary: "I meant what I said, and I said what I meant... An elephant's faithful, one hundred percent!"
Horton is kind and trustworthy, but unfortunately, the lazy bird Mayzie takes advantage of his good nature when she leaves Horton to watch her unhatched egg.  Told with Dr. Seuss's signature rhymes and trademark illustrations, this is a tale that will be enjoyed over and over, by reader and listener alike.

What Mrs. Connell says: "This was chosen because during the season of Lent, we all can remember to be more like Horton.  He's reliable, respectful, compassion and has a huge heart.

Check back next month for more suggestions!
Posted by HTS Admin at 7:23 AM No comments: 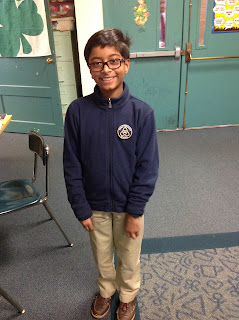 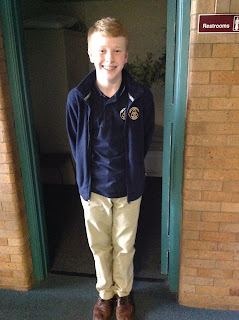 We are another week closer!  This week we interviewed Maurice and Lefou.  Both boys have been in musicals before and are very excited to add Beauty and the Beast, Jr to their resume!

- "The Mob Song is my favorite"- Vedant

- "Getting to know more people."- Vedant

- "Doing the scene with the Beast when he comes out of the shadows."- Matt

What has been the hardest or most challenging aspect of doing this musical?

- "I'm the opposite of my character, so I feel like I need to act more"- Vedant


Check back soon for more interviews as our production of Beauty and the Beast, Jr gets closer!
Posted by HTS Admin at 11:51 AM No comments:

What Are You Doing this Lenten Season?

It is Ash Wednesday and the question on everyone's mind is "What can I do this Lenten season?".  We asked the teachers what they focus on teaching during the Lenten season and what the students can do at home for the next forty days. 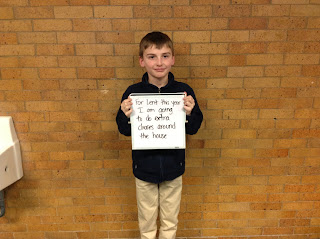 In first grade, Mrs. Smith focuses the Religion lessons on doing extra good deeds.  The classroom will have a "Lenten Tree" displayed on their bulletin board that will bloom good deed leaves throughout the season.  The first grade's morning song will change from "Good Morning, Lord" to "Go in Peace" which is a quieter song that focuses on Jesus forgiving our sins and going out into the world with peace and love.  First grade focuses on a more positive tone during Lent, rather than the "giving something up" mentality which they can bring into their homes throughout this season. Mrs. Smith is following the tone set in the classroom by not giving something up, but instead spending time with her father-in-law every Sunday and helping him during this Lenten season. 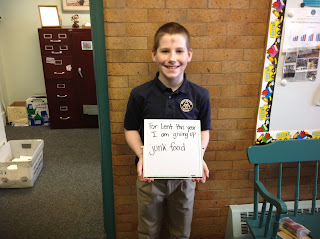 In second grade, Mrs. Roth focuses on the second graders' First Communion during the Lenten season.  She takes advantage of the many trips to church to teach the Stations of the Cross and learn about Holy Week. 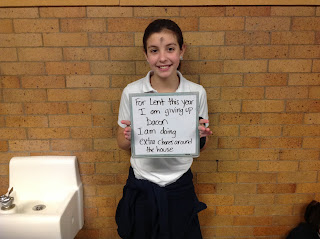 In third grade, Mrs. Cifarelli focuses her Religion lessons on kindness and compassion.  The third graders will think about their actions before they perform them to make sure they are kind.  They also practice bringing that kindness home throughout the Lenten season. 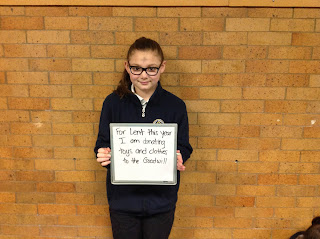 In fourth grade, Mrs. Bevans focuses her Religion lessons on forgiveness.  Fourth grade relates the fact that Jesus died for our sins and was able to forgive those who made him suffer to showing mercy for the little things classmates or siblings may say or do to us.  They also focus on not just giving up something, but also what can they do instead that will help others.  An example is many fourth graders are giving up video games this Lenten season, and they are now being challenged to find good deeds to do for their family and their community during those moments they would have been playing their games.  Mrs. Bevins will focus on being more patient this Lenten season. 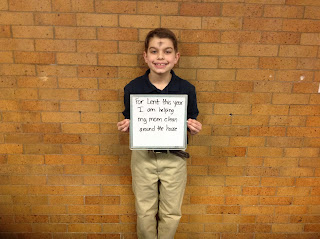 In fifth grade, Mrs. Saia focuses her Religion lessons on Holy Week and what they can do during the Lenten season.  The fifth graders have an assignment to read a Gospel passage about Holy Week everyday during Lent and do an activity that coincides with the reading.  They also learn about the flight of the Israelite's in Exodus and how it relates to why Jesus did what he did during Holy Week.  The fifth graders also participate in a "Jelly Bean Prayer" where each student can earn a jelly bean a day by doing a certain action, such as making a sacrifice for a day or doing a good deed. 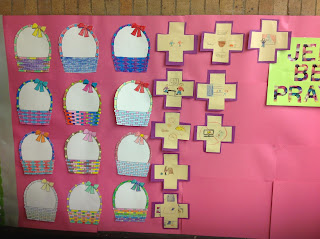 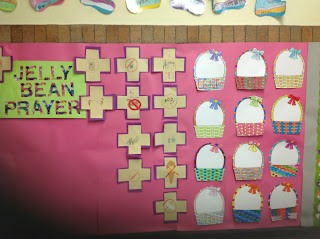 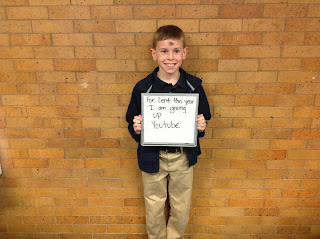 In seventh and eighth grade, Mrs. Shortell-Fratantonio focuses her Religion lessons on empathy in the classroom, the community and the world.  Both at home and at school the lesson for the students is to reflect before they speak or do.  The students' should reflect on how their actions can make a difference and be more helpful in their households and also in their communities. They should also reflect on how their words can be used positively.  Mrs. Shortell-Fratantonio will focus on empathy and compassion for those who do not feel safe and try to help where she can this Lenten season.  Mr. Forino will be giving up tea and alcohol this Lenten season. 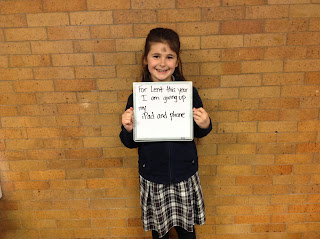 We look forward to a very kind and helpful Lenten season this year!